We were invited to an impromptu weekend away with friends at Brighton Caravan Park in South Australia which strangely enough we had never set foot in before and in fact didn’t even know of its exact location. This is despite it being only 17 kilometres from Adelaide and pretty much in the neck of woods that I grew up in as a child.  Perhaps that’s exactly why I’d never considered staying there, you think you know all there is to know about an area sometimes, but just like us, places change as they mature.

This park did go through a bit of turmoil in 2014 when 40 permanent residents at the park were evicted by the local council to make way for development of this council owned park. Improvements are being made with new cabins, playground, swimming pool and barbecue areas either already completed or on the plans.  It’s one of those hard situations when people believe that they are entitled to stay in permanent vans with hard annexes only to find down the track that councils or owners change their minds and they are forced to find other living arrangements.  Personally I would never believe permanent in a caravan park means forever.

That being said, the park is an absolute gem that is in one of the best locations in South Australia for its proximity to the city, a major suburban shopping centre and obviously the beach. And what a fantastic beach, although it is Brighton Caravan Park it actually sits on Seacliff Beach which joins up with Brighton Beach. 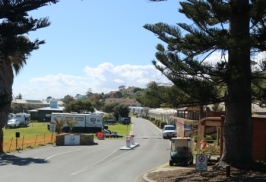 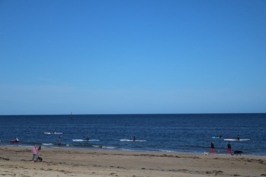 The Brighton jetty is visible from the caravan park and one of the best benefits is that the Seacliff Surf Life Saving Club is right next door, an easy stroll from your caravan. The club is open for breakfast, lunch and dinner and have meal and drink specials and live music on Sundays, all big ticks in my book. As a bonus, if you are staying in the caravan park you also pay member’s prices. 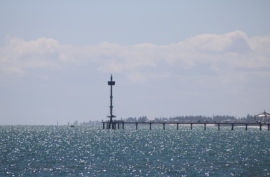 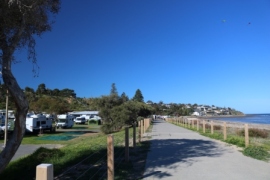 Staying on a beach front site means you will back your caravan up to the walking path that meanders along the esplanade so there are no excuses for not getting on it and taking a walk in either direction to get a better look at this coastline. Already in spring the surf life savers are busy going through their paces in readiness for summer, the walking path on a Saturday morning was like watching peak hour traffic and the water was busy with small yacht races, kayakers, paddle boarders and people walking dogs. 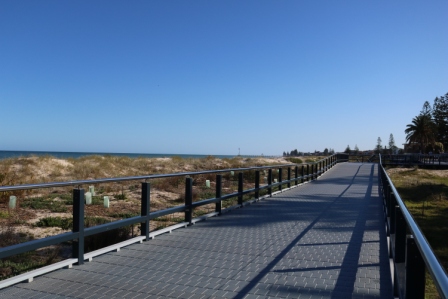 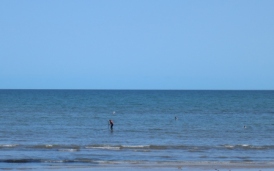 Brighton Caravan Park is dog friendly and so is the beach, just check the local council site for what time of the year you have to have your dog leashed to be on the beach and at what times.

This sculpture isn’t complete without you, by standing in the middle you become the centre line of peace, acknowledging in order for our world to gain peace it starts with you.

A very clever idea which does look good if you stick yourself in the middle to complete the peace sign. A little bit harder though when you are out for a stroll on your lonesome, it’s not that easy to get a selfie here.

After a walk along the esplanade in both directions for as far as you wish you can then tackle the steps behind the caravan park that lead to a monument which is a landmark to the local Kaurna (pronounced garna) aboriginal people and original custodians of this area. It’s a pretty steep climb, my legs are still complaining about it, but the view over the park and coastline is worth the pain. 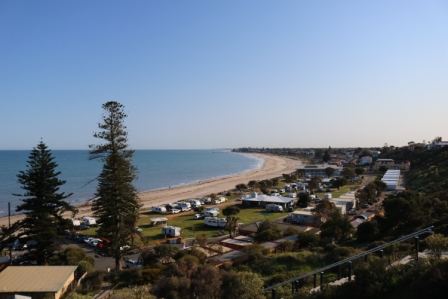 You’ll also see the start of the Sea to Summit trail which begins here and ends at Mt Lofty, a 32 kilometre challenging walk that ascends 1400 metres from sea to summit. I’m sure it would be very nice…but not for me. 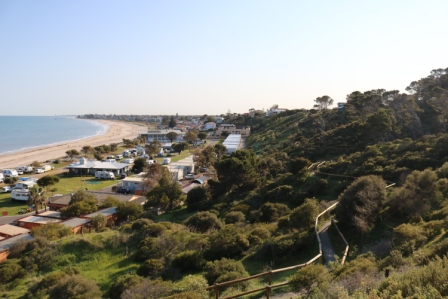 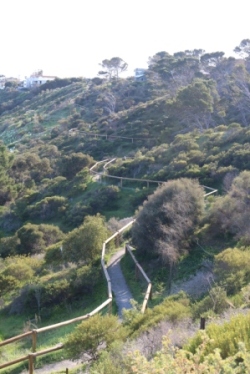 Back in the caravan park the amenities are fabulous. There is a brand new looking ablution block, with fantastic showers with big shower heads and beautiful wave effect tiles. The camp kitchen is roomy, has outdoor barbecues and a nice little TV, sitting room. 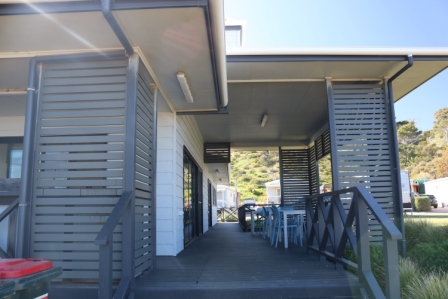 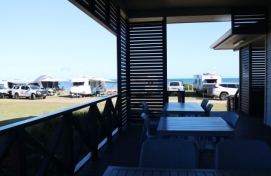 Not that you will want to spend too much time indoors with views like these. Just another top beach in South Australia where you can sit back and enjoy the sunset as the sun dips into the sea. Even once dark it’s a comfortable park to spend the evening outdoors, with small contained fires OK to use too.

A surprising little park that we will definitely be revisiting.