Christmas seems to sneak up on us more quickly each year and before you know it you’re only a fortnight or so away from the main event! In Adelaide the first thing that heralds the festive season is the annual Christmas Pageant through the city streets.  This incredible pageant has been held every year since 1933, starting as a way to brighten people’s spirits in the depression years.

Back then, the first pageant had around 8 floats and four bands and the street parade took around 40 minutes to arrive at its destination which was the John Martins Department Store, then Father Christmas would be escorted in to the ‘Magic Cave’, an absolute wonderland for children. These days the pageant winds its way through over 3 kilometres of city streets, and this year it had 63 floats, 16 bands as well as other walking groups (clowns etc…) and 11 dance groups. It’s certainly a joyous spectacle like no other and something that every South Australian child has to experience at least once in their lives. 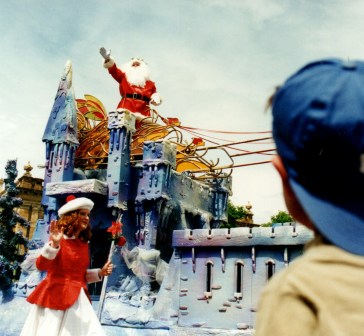 The city of Adelaide gets decorated with other signs of Christmas including a giant Christmas tree which is lit up each night in the city’s main Victoria Square. And a giant Father Christmas stands tall to greet everyone in the city. He has had a few homes over the years but nowadays he is on the façade of the Adelaide Central Market.

Even mother nature does a bit of her own decorating with Jacaranda trees in full spectacular purple bloom around the city and suburbs. 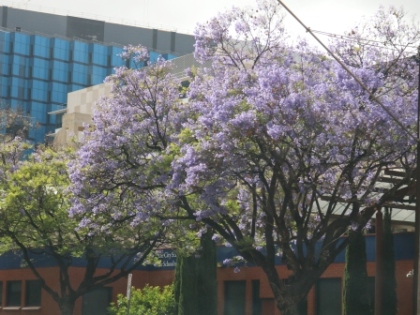 Some people use the pageant day as the sign to start decorating their own homes and no matter how old you are, it’s a lot of fun to watch (it’s televised too) and it kicks off the festive season feeling.

We used to buy a living Christmas tree each year, always underestimating how big it actually was, and decorated it with all sorts of mixed decorations, things that our children had made, pasta angels were always a favourite, and other bought and gifted decorations. 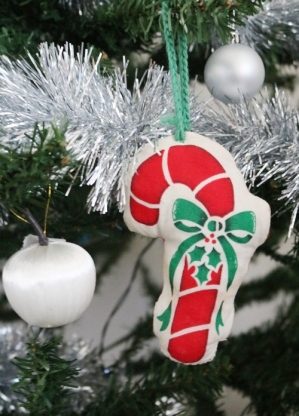 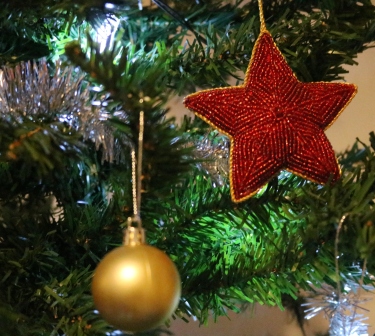 When the caravan holidays started earlier and earlier after Christmas each year though, the thought of un-decorating the tree too early after Christmas didn’t feel right, but coming home to a dead tree and pine needles everywhere wasn’t good either! So we moved on to a ‘realistic looking’ fake tree instead. We’ve pared back the decorations a bit too, but it still gets covered in special decorations that mean a lot to us. The ones given to us, remind us every year of the people that gave them to us. 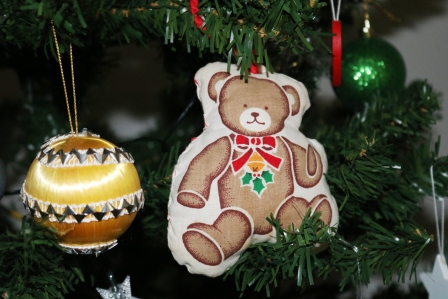 On the tree, and throughout the house, are little bits of years gone by with decorations made by our children at school, some from people no longer with us and others from friends and relatives that have added something to our Christmas each year. 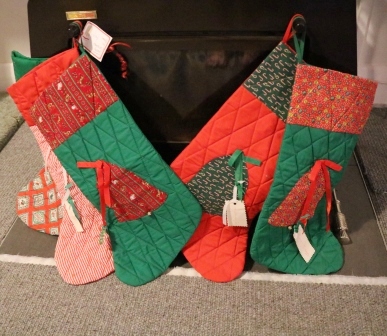 We try to stay away from the snow theme too much in our house, it’s a bit absurd when we have the air conditioner going and its 39 degrees or hotter outside. But we do love a bit of Christmas bling around the house. Father Christmas has to find us somehow.

Now there’s just the shopping, wrapping, baking, fun to get down to.

Hope you are enjoying the pre-Christmas preparations, just keep thinking of the relaxing holidays afterwards.

6 thoughts on “Christmas in Australia”

First Drop Wines🍷 Amen 🙏
First Drop * Good Drop * Barossa Valley 🍷
Even the sunsets are wine coloured in the Barossa Valley. 🍷
Cute and quirky ~ tasty wines ~ top service ~ vineyard views @davidfranzwine
One of a very friendly possum family in the @big4barossatouristpark 🤎
A saying for every occasion ~ as long as the answer is wine. 🍷 😁