Tucked away off the busy Goolwa Terrace is an interesting park full of Australian plants native to the area and a pathway leading through them, dotted with interpretive signage. The signs explain how the plants were used by the local indigenous Ngarrindjeri people for food and medicine. The park was created in 2007 as a joint project between the Alexandrina Council, the Ngarrindjeri people and local artists and is intended to bring people into a welcoming and healing space to learn a bit of history as you meander through.

The park sits between historic stone buildings and links the story of the indigenous first people of the area and European settlers in Goolwa. This place was a Ngarrindjeri meeting place, the story of which is:

“A long time ago in the time of creation, Ngurunderi, the Spirit Ancestor of the Ngarrindjeri people travelled these land and waters. He camped here at Goolwa.

Before his arrival at Goolwa a man named Jekejere cleansed and prepared the area for Ngurunderi.

When Ngurunderi arrived he was pleased and said ‘thank you my brother’.

Ngurunderi stayed here at Goolwa for a time and conducted spiritual teachings to the Ngarrindjeri people throughout our lands and waters before travelling onwards along the coastline towards Kangaroo Island”.

As you follow the path through the small garden and read about how the various plants were used, the philosophy behind the park begins to show in explaining that everything is connected to the earth and us to each other. Plants include a common flax lily found in the coastal dunes which has edible berries, leaves that can be made into a tea, the root could be chewed and act as a medicine for gut problems and the leaves could also be split and used as string. Other plants were used as basket and mat weaving material, a skill that the Ngarrindjeri people are well known for. Sheoaks and native pines also feature in the garden because they were known as pharmacy and hardware store trees. Bark could be used for making shields and tools and the pinecones, leaves and sap used for various medicinal purposes.

In the centre of the park an open area comes into view which holds a large mosaic mural laid out on the ground with room to sit around it. The mural symbolises a woven meeting mat, and features Ngarrindjeri people collecting reeds and weaving them into baskets and mats.

Nearby on Goolwa Terrace you can also find three timber sculptures by artists Lars Helmann, Silvio Apponyi and Ngarrindjeri artist Robert Wuldi. The timber came from trees cleared from the district’s roads after they fell in storms and today they stand again as intricate carvings. The sculpture by Robert Wuldi is that of a grandmother and grandchild wrapped in a traditional thick coat. Silvio Apponyi’s sculpture is of a group of pelicans and Lars Helmann’s work is of a coolamon, an aboriginal carrying vessel, traditionally used by women to gather bush tucker or cradle babies. The pieces combined are named Tumbewarrin Ninkowi – Care of the mother. 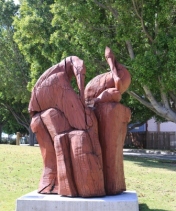 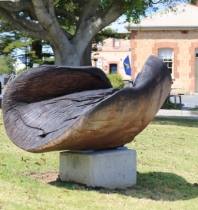 All of these are easy to find as you wander through the town of Goolwa in South Australia, around 80 kilometres from the city. The town of Goolwa features in my story in the December issue of Liquid Life and Leisure, available to read online for free anytime.