Family holidays and capturing the moments in photographs have always played a huge part in my life. The memories and history of not only our lives but places we’ve visited on holidays are great to look back on and bring a smile to everyone who was there. We’ve got quite a history of owning vans and upgrading them over the years too. The first caravan we bought was in 2006. A 1973, 16 foot Viscount Ambassador in pretty good original condition.

This was an upgrade from a home built off road camper trailer. The reason we wanted an upgrade was to have something we could tow away, park, and with very minimal set up required, start enjoying our holiday time as soon as possible. The thought of mostly solid walls around us and not having to worry about packing up wet canvas was appealing too.

When we started using this van our children were aged 11 and 13 years old. We had been holidaying with the camper trailer for years prior and decided to upgrade to more comfort and less work for us. It was a little beauty with some original features still including the front curtains and window blinds, blue vinyl seats and 70s lino on the floor. Then there was the annexe, a candy stripe delight that when we set up we would often joke that it looked like the circus was in town. Perhaps we weren’t too far wrong! Because before too long out would come the bikes, skateboards, scooters, boogie boards and whatever else was trendy at the time.

Hence my reference to a time capsule in the title. Looking back at our photos from when we owned this van it’s also a picture of our family’s life.  The time was all about kids getting away and being active, being independent and roaming free until they got hungry or thirsty and would reappear sun kissed and weary with salty hair, sandy skin and tired eyes.

It was a time for trying new things and daring to have a go. The first jetty jumps, learning how to catch and then clean crabs.  Going four wheel driving on deserted beaches and running through pristine sand hills that went on for miles and making the only footprints on them. 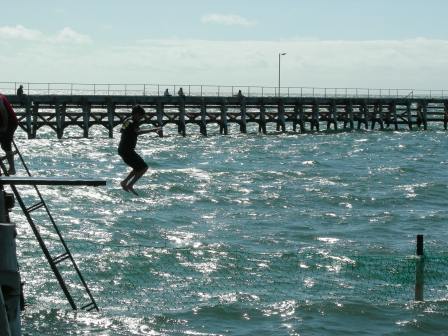 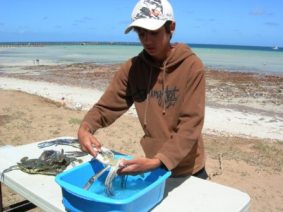 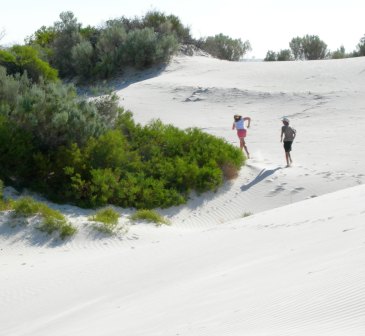 It’s even a time capsule of the family pets. We remember caravans according to which kelpie we had at the time and which holidays they joined us on. This was Jack our beach loving, sand hole digging, ball mad, black kelpie.

It was a fairly basic caravan but it suited our needs perfectly at the time. There were two single beds at the rear of the van for the kids and the table at the front dropped down to make a double bed. It did have the luxury of an after-market air conditioner installed too.  It didn’t look terribly pretty, but it sure did the job when it was needed.

It was a great van for a couple of years but we outgrew it, the children got bigger as they have a habit of doing!, the kitchen was a bit too basic with only a bar size fridge and no oven and it became a nuisance having to put the kitchen table up and down all the time to be able to sit inside when the weather wasn’t so good and then make into a bed every night. So we moved on to a bigger and better caravan (to be shown in a future post) which suited the next stage of our lives.

It just goes to show though that there is a van out there to suit everyone and you don’t need to spend a fortune on new and fancy to start caravanning and having fun. I think it’s so important to document in photographs the way you holiday and how you progress over time, it can be a really important part of family history and so much fun to look back on.

There is one thing I miss from the old caravan days and that is the absolute character that these 70s vans had.  For all their kitsch they certainly had personality in their shapes and daring colours, something that I think some of the newer vans are missing. If only someone made vans that were a mix of nostalgia to look at but with all the mod cons.

6 thoughts on “Caravans or time capsules?”

Whether you call them a brief, pod, pouch, scoop, squadron or just a bloody big bunch ~ there are heaps of pelicans at Menindee right now. 💙
The Darling River is flowing and the Menindee Lakes region is teeming with life. 💚
I find it so frustrating to attempt Astro photography but I’m trying to improve and #lakepamamaroo has to be one of the best places to give it a go. ✨
Hats off to you Burke and Wills 👏I’ve walked a little over 5kms today and I’m done. 😂
Never had a night like this before, with stars reflected off a still lake.🤩 The magic of Pamamaroo Lake in outback NSW.
Well this is one pretty perfect spot for autumn caravan and camping. Pamamaroo lake is only an hour from Broken Hill and at the moment is full of water and we’ve had incredible sunsets every night.