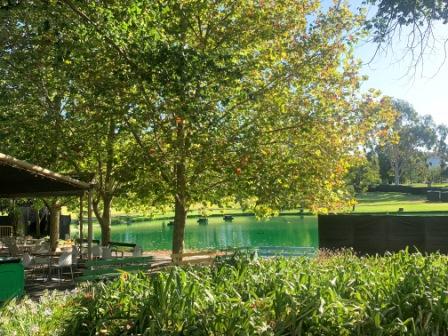 The weather is playing nice in Adelaide and there is a buzz of optimism in the air, making this year’s Fringe Festival really joyful.

Even though the city is filling up with people attending shows, it’s being conducted as safely as possible and appealing to the majority, with patrons having to be at least double vaccinated to attend shows, and mask wearing is still mandatory in venues.

We were able to take great advantage of attending the Fringe this year by using a Great State Voucher to take $100 off our city motel accommodation which left more money to spend on enjoying the food, drinks and entertainment in the city.

Our choice of hotels was the Soho in Flinders Street, a motel we’ve stayed in before and so very convenient to the east end of the city. It has really lovely rooms, easy car parking nearby, friendly, helpful staff and for a city stay it’s relatively quiet.

If you’ve ever contemplated visiting Adelaide during the Fringe Festival time, do it! This year the Fringe is on from 18 February to March 20 and you’ll find literally hundreds of shows with something to suit every taste.

There are comedy shows from local, national and international stars as well as music, cabaret, magic, dance, theatre and visual arts and all groups are catered for with some shows specifically for children and families.

A lot of shows can be found in a couple of convenient locations in the east end of the city in Rymill Park / Murlawirrapurka which is taken over with pop up venues, food trucks and more and becomes ‘Gluttony’ during the fringe and Rundle Park / Kadlitpina next to it hosts ‘The Garden of Unearthly Delights” and more food venues, sideshows and rides, bars and entertainment venues.

You are only limited by time and money as to how much you want to get involved. There is enough on to be entertained every night but we decided to pick out a couple of specific items and then just take in the ambiance around these two parks.

The venues open up from 5pm and once past the entry points you can wander through the park at leisure and find plenty of seating outdoors while you have something to eat and drink (the choices are many) and people watch before your selected show begins.

The parklands themselves are beautiful with easy pathways and signage to follow, a lake and huge gum trees which are lit up at night too. Once the sun has set you get a show from nature too with what seems to be a never ending flight of fruit bats, something incredible to see.

Our pick of the shows to see this year was ‘Classical Mystery Tour’ which was an all Adelaide production consisting of a 21 piece orchestra and rock band, who together take patrons on a journey through the Beatles 1967 ‘Magical Mystery Tour’ album. It was just a joyful trip back in time, listening to the to all the songs from the album ~ All You Need Is Love, Penny Lane, Strawberry Fields Forever, I Am The Walrus, Baby You’re A Rich Man, Flying, Fool On The Hill, Blue Jay Way, Your Mother Should know, Hello Goodbye and Magical Mystery Tour.

The show goes for an hour and it is full of stories behind the songs, fun facts and is absolutely mesmerizing to listen to, especially with the strings, and other orchestra members backing the band. The band members include Anthony Leppa (complete with Sgt Pepper outfit),  Dusty Lee Stephenson (front man / rock star), and Ian ‘Polly’ Polites (awesome keyboardist, singer and friend of ours!)

During the show the crowd is encouraged to get involved and sing along, which is a bit difficult to show our enthusiasm behind masks, but they do add the benefit of nobody knowing when you sing the wrong words. 🙂 The show is a lot of fun and really uplifting but you’ll have to get in quick to grab tickets as the show only runs until the 6th of March.

A big tip when you visit Gluttony is to download the App which gives you all the info on what’s on, a map of the park and where to find shows and best of all, offers that give you discounts on the night. We took advantage of one of these offers which got us complimentary tickets to see ‘Borealis’, an arts meets technology installation by Dan Archer. Believe it or not the discount was 100% – yes free tickets except for the transaction fee of $4.80.

Normally the show would cost $10 per head + transaction fee and for that you get to experience the wonder of the Northern Lights phenomenon which is projected in a light and sound show over the Rymill Park Lake in the darkness. It is absolutely mesmerizing sitting on the grass around the lake watching the high powered laser beams travelling through man made particle clouds to create the spectacle. Another one to definitely see and something for the whole family to marvel at.

You can end the night out with more food and drinks in either of the parks before wandering back to your accommodation, or there are plenty of taxis ranked outside the parklands.

If you’re not staying in the city itself, there are a few caravan parks not far from all the action, including the Adelaide Showground Caravan Park which you can read about in an earlier post.

One thought on “Adelaide Fringe 2022”