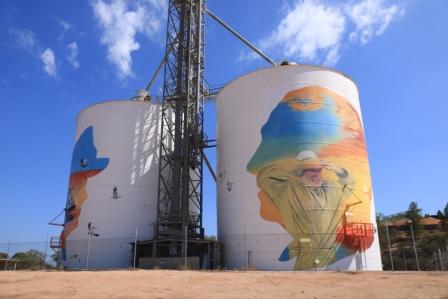 Crossing over the historic suspension bridge spanning the Murray River from Renmark to Paringa in South Australia, will lead you to a gallery of painted silos which were completed in early 2021.

On the left of the road as you drive into Paringa you’ll find ample car parking to pull over and take a look at these silos painted by Adelaide artist Jack Fran, which feature stories of this Riverland region.

The two silos are painted on both sides and feature silhouetted faces of well known local identities and iconic Riverland images, with the common theme of flying pelicans across all of the silos linking the stories together.

On the silos facing the road, the first one features the silhouette of Charles Chaffey, an early pioneer of the Renmark area, who brought irrigation and water distribution to vineyards and fruit growers of the region.

On the same silo is David James Jones, a character well known in the area as ‘Possum’.  Possum’s story is that of a man who lived and roamed along a stretch of the Murray River between Renmark and Wentworth during his lifetime, starting when he lost employment during the Depression in 1929 up until his death in 1982.

For more than 50 years he lived off the land, shunning the company of others but often performing deeds like chopping wood, mending fences, clearing weeds and more for the station folk whose properties he passed through. He was given the nickname of possum because of his practice of sleeping in trees.

His remains were eventually found in 1982 near Lock 8 on the Murray River, bordering New South Wales and Victoria. He was buried on a station in NSW and his gravestone reads; ‘At rest where he roamed’.

The second silo features the face of Captain Pearl Wallace, who was born in Renmark in 1911 and became Australia’s first female certified skipper. She skippered a steamer which carted firewood and bales of wool along the river and she was the inspiration for the book and television series, ‘All the Rivers Run’.  Pearl continued working as a skipper on the river until 1977, before retiring and passing away at the age of 94 in 2005.

On the same silo is the Paddle Steamer ‘Industry’ a workboat that was used to keep the river open by removing snags during the construction of locks, weirs and barrages along the river. Today this paddle steamer still exists as an historic passenger carrying vessel.

On the back of this silo is the silhouette of another noted Renmark resident, Sister Balfour-Ogilvy, who was a veteran of the Boer War and WW1 before being tragically killed by Japanese soldiers during the Bangka Straits Massacre.  Also featured is an original Liba-Liba houseboat, a reference to the popular houseboat tourism industry on the river.

The final picture is a silhouette that signifies first community inhabitants on this traditional land of the Erawirung people. It also features the Paringa Bridge, men fishing in a boat while a Murray Cod (Pondi) swims below the water line.

Some new silo art to enjoy in Paringa, which is a little over 260 kilometres north east of Adelaide on the mighty Murray River.