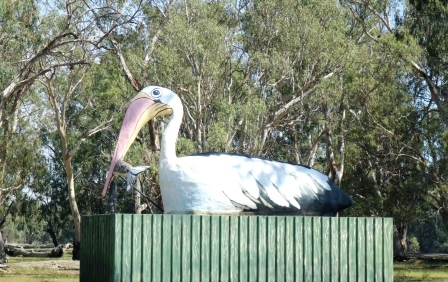 If you haven’t been to the Riverland area of South Australia in a while, here are a few interesting places to go and sights to add to your itinerary.

Approximately 11 kilometres north of Berri on the other side of the Murray River is the town of Lyrup which, like a lot of Riverland towns, has a Community Club where you can go for family friendly, relaxed dining and drinks, and there is also a general store in town.

Lyrup is the home of Murray River National Park which includes 2,000 hectares along the floodplain of the river and is a great spot for birdwatching, fishing and camping. There are two campgrounds where you can stay on the river and dogs on lead are allowed too. All of the campsites are unpowered, mostly shaded and some have fire pits and there are long drop toilets. Campsites cost $13.50 per night and can be booked online at the Parks SA website.

Next to the river ferry at Lyrup there is the SS Ellen RV Park, where you can stay for up to 7 nights. There are 4 powered sites and 3 unpowered in total and BBQs, shelters, a playground and public toilets nearby, all for $10 per night.

Crossing the river via the ferry and heading a little further north you’ll find the town of Renmark which has lots of shops, hotels, cafes and a fantastic Renmark Club right on the riverfront with the best views in town. The food is terrific and there is alfresco dining where you can watch the river traffic and there’s even parking out the front and walkways, if you’re arriving by boat.

On the riverfront is a combined fountain, water play, lawn and BBQ area which is called the Taylor riverfront Precinct and Harry Clark Water Play area, after two members of the community who contributed much to the town.

The water play area has a non-slip surface and swimming pool quality water for kids to run amok in and have fun on a hot Riverland day. The four BBQs are all sheltered and have seating too for families to enjoy a day on the riverfront.

A 24 metre river deck also extends out from the park and makes a great viewing area to watch the river traffic, speedboats, houseboats and big paddle steamers cruising by.

At the far end of the park is the Shi Shi lion statue, a friendship gift from the city of Shi Shi in China, a sister city of Renmark / Paringa. On the wall next to it, a mural painted in shades of blue commemorates a fruit packing shed which once stood on the site and paddle steamers and barges that were used as transportation at the time. The mural was painted by Renmark High School students in 1998.

Another Riverland town to find some interesting art and great sites for caravanning is Loxton. Loxton is 40 kilometres south of Renmark and 22 south of Berri. The Big 4 caravan park has caravan and camping sites right on the river, with powered and unpowered to choose from.

Nearby is the Big Pelican, which began as a float in a Loxton parade in 1979. In 1980, some locals as a joke, floated it down the river on car tubes but that ended up damaging the paper mache construction. A few years later it was remodelled and renovated and the big pelican made appearances at a few parades and fairs including in Adelaide, but was then retired until 1992.

Thanks to locals though it now has a permanent home after being coated in fibreglass and sits by the caravan park entrance. A smart design, it sits on a frame with an axle so the whole thing can be moved if need be when the river is high. No more giant floating pelican!

Some of the best looking caravan park sites are right on the river next to the Lions park, a lovely green space with play equipment for the kids and giant eucalypts, one of which is called the Tree of Knowledge, and has flood markers attached to it.

This massive river red gum has indicators of river levels attached to it showing when the Murray River has been in flood in years past. Look way, way up to see the 1956 level, which peaked at 10.2 metres in Renmark and up to 12.3 metres at its worst. This flood was caused by heavy rainfall in Queensland, New South Wales and Victoria all of which inundated the Murray Darling River System and caused the largest flood ever recorded in South Australia.

In the town of Loxton there is great shopping in the main street as well as a hexagonal fountain with copper artwork by local Vern Wilksch depicting local scenes, and it sits in front of the town library and information centre. Behind that building is the Loxton Soldiers Memorial Rotunda which is surrounded by mosaics made by artist Stephen Bowers.

A new mural can be found across the road at the top of the ANZ bank building. The mural was painted this year by local artist, Jarrod Loxton and features scenes from this lovely Riverland region.