Our next leg of the journey took us to Exmouth, where we started seeing huge termite mounds followed by sheep crossing the road about 30kms before town and then emus greeting us on the way in. 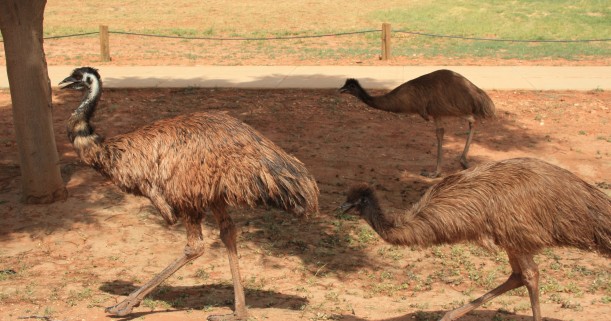 The great part about travelling at this time of year (before busy season) is that we could have the pick of sites again at the caravan park we stayed at. Here too were emus roaming free in the park.  There are signs around to warn that snakes can also be around so keep your eyes open, will do!

We charged everything that needed charging, phones, laptop, camera battery etc… because we planned to spend a couple of nights free camping again.  We met up again with a couple we first met in Monkey Mia, shared more stories and went out to dinner together at Cadillacs – Honky Tonk Bar and Grill.  Yes it is as….interesting, as it sounds.  Country music themed bar with great food. We had a fun night out comparing the ups and downs of caravanning at this time of year.

The next day we headed off to the Cape Range National Park 40 kilometres from Exmouth, around the North West Cape. The Ningaloo Coast World Heritage Area. It has plenty of camping areas all along the coast including quite a few big enough for caravans.  The bonus is that the road through the park is all bitumen and then turn offs to the camp sites are not far off the main road and on good dirt roads.

Our annual parks pass came in handy again, no entry fee for us but camping fee is $10 per head, per night.  We planned on two nights at a place recommended to us by a few people, called Osprey Bay.

We weren’t far into the park when we saw a big parente (goanna) ambling along the road, in no hurry to move from the middle so we had to crawl along behind it until he finally decided to leave the road.

We were told at the ranger station that they were doing a controlled burn today at Mandu Mandu Gorge so we couldn’t go there, but that was ok by us we were here for the coast mainly.

When we arrived at Osprey Bay we reported to the campground host and out of 46 sites at this ground we saw only 2 tents there, so we could have a pick of sites again but the host did say his top pick would be site 11.  Spot on! 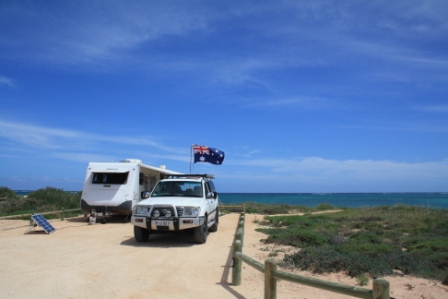 Free camps don’t get much better than this, a wide site for caravan and car, view over the ocean, walking track to the beach for swimming or fishing off the ledge and the cleanest drop loos (Aussie Bush Loos) that you can find. 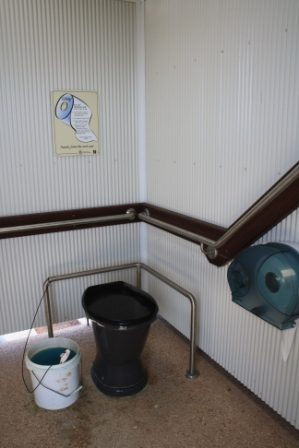 We weren’t there long when a little joey jumped out from the bushes.

There is no water or power, but our solar panels are keeping everything 12v charged nicely and with water tanks on board the caravan we are fine for a few days of careful use. No telephone service means no distractions either so you have to be entertained by nature which is easy out here.

The temperature when we arrived was 30 degrees with 70% humidity, but thankfully a strong sea breeze keeps everything bearable and keeps the flies away mostly.

The beaches along this cape are used by day visitors as well as those staying in the campsites and seeing us set up (you can’t miss our rig) we had a visit from a day visitor who had come for the snorkelling.  A young Italian man who was in the country working at a mine at Meekathara and on leave for a week.  Tired of all the meat meals he’s been getting he had made himself a pasta lunch but forgot to pack in a fork.  Could he borrow please?  What can you say, sure, then we got his whole interesting story.  The people you meet along the way are priceless. 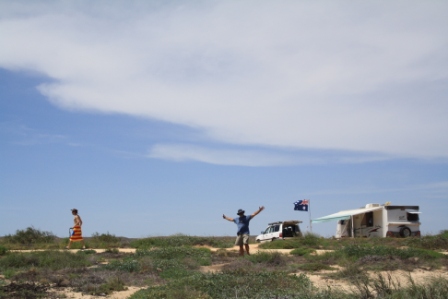 As the day went on a few more people arrived but the campsites are so well spaced and staggered that you don’t feel like your space is being encroached on.  An American and a Canadian girl travelling together and tenting next to us.  Three English and one French, friends on working holidays, a German couple with a very young family who came to ask us about the jellyfish in the water.  All great to chat with. 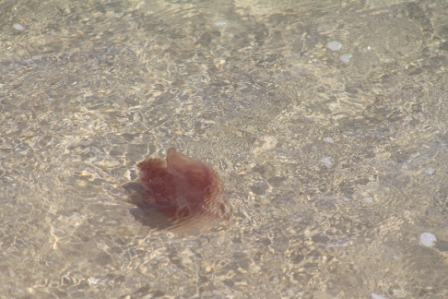 In the afternoon we tried fishing from the rock ledge overhanging the water and although we had no luck it was amazing standing there and watching turtles swimming past us and coming up for a breath of air every so often. 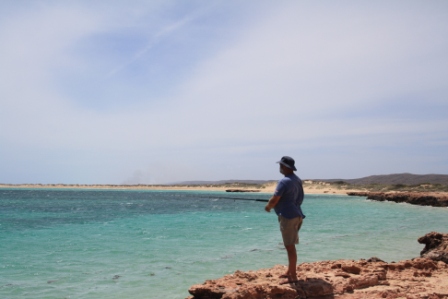 The bay next to where we are camped, Sandy Bay is popular with windsurfers and kite surfers and they are keeping us entertained as well. Not a bad spot at all with the sun setting into the sea and then behind us a big moon rising.

On our second day we went on a discovery tour of the other beaches in the park.  Yardie Creek is at the southern end and has a walking trail that takes you along the gorge, easy at first and then we were told a bit of a billy goat track.  As we were walking in we were lucky to be walking next to the guy who takes people on the boat tours into the gorge, but not today as he had photographers he was taking in for an advertising shoot. 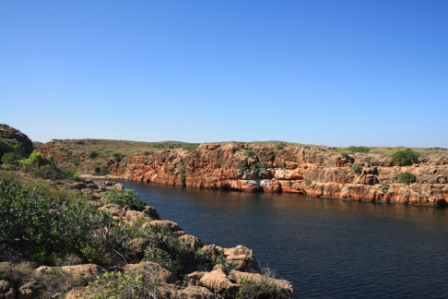 He was full of information though and because of him we spotted a black footed rock wallaby in the gorge.  Another great Aussie character, he told us when we asked the question that yes you can drive the 4wd track down to Coral Bay but he had 2 rules for that, “use someone else’s car or hire one”, good advice.

Next stop was Turquoise Bay an extremely popular snorkelling and swimming beach and the most crowded beach we’d seen so far.  There are very strong currents here so not one for the inexperienced snorkelers. 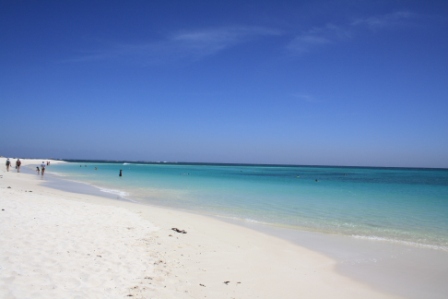 As we drove through the park we saw an emu, a kangaroo bounded across the road in front of us and then as we drove into Tulki Beach campsite, one clever roo sheltering under a shady picnic table. 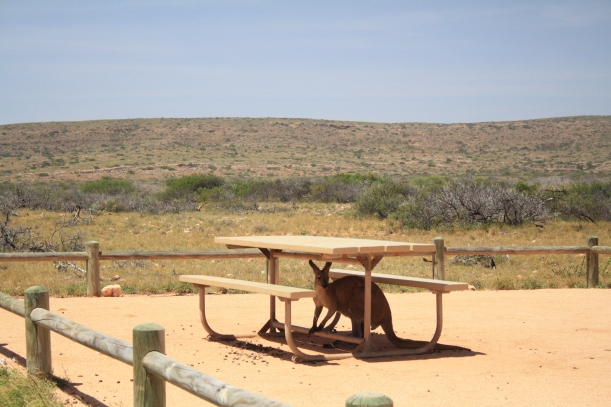 We stopped in at the Milyering Discovery Centre where there is a very important and informative video to watch on where to go snorkelling in the park and what to look for.

Last stop a location called Oyster Stacks which you can only snorkel at when its high tide so as not to damage the close in coral and rock.  Here you can literally snorkel with turtles who go about their business unperturbed by people sharing the water with them and also view colourful coral and many different types of fish.On our last evening at Osprey Bay we had the best star show we’ve seen yet. Millions of stars and a clear Milky Way with no light around us apart from what we were creating and then a moon that looked like a sunrise again. 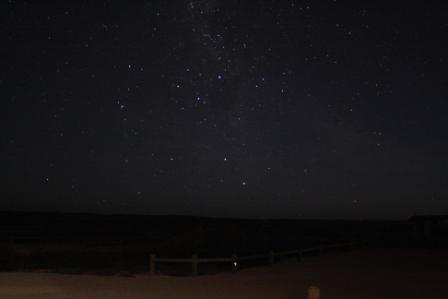 Now we are back in Exmouth for 1 night to recharge all our electronics and plan the next leg of the journey. Oh and not a bad spot to recharge ourselves too – our caravan park pool.

One thought on “Exmouth Encounters with Wildlife.”

New post ~ The Angel of Hahndorf 🕊
Happy International Women’s Day 🙋🏼‍♀️
Happy International Women’s Day 🙋🏼‍♀️
Beach face 🙂
‘It doesn’t matter how old you get, buying snacks for a road trip always looks like an unsupervised 9 year old was given $100’. 😂 I’m not sure who said that but it’s pretty spot on. 🙋‍♀️
Whoop whoop to the long weekend. 🙌 Hands up if you’re not ready for summer to end.🌊