The regional city of Mount Gambier is a little over 430 kilometres from Adelaide which makes it close enough for a long weekend but with so many interesting natural features to discover you’ll want at least a week to delve into all of it. It’s also a convenient half way mark if you are travelling to Melbourne.

The attraction that Mount Gambier is most well known for is the Blue Lake a naturally occurring phenomenon where the water that fills this dormant volcano crater turns a vivid bright Turquoise blue, generally between the months of November to February each year. From March through to November it’s still breathtaking as it takes on a deeper but still striking blue colour. The cause of this remarkable blue colour is due to calcite crystals and algae interaction which as the water warms up creates the colour change. For a slow look around there is a walking path circling the crater which takes about an hour to walk its 3.6 kilometres.  The lake is the water supply for the towns over 27,000 residents, and a huge drawcard for visitors.

The other unique features in Mount Gambier are the sinkholes which were created when rainfall and groundwater weakened limestone cavities causing the rock rooves to collapse and form these now plant lined caves. These cavities can be easily seen from street level from viewing platforms but can only be accessed further by negotiating down a series of steps.  One of these easiest sinkholes to see is Cave Gardens which is right in the centre of town. Steps take you down for a closer look inside with more viewing platforms along the way to stop and take it all in. 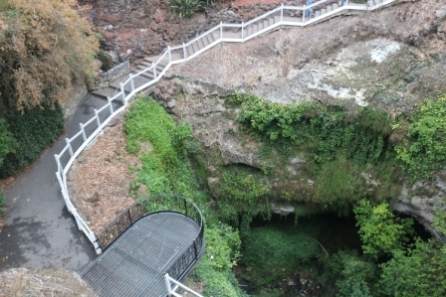 This sinkhole in the city is surrounded by beautifully manicured grounds and rose gardens and sits behind the Riddoch Art Gallery and Main Corner complex. Aside from some really impressive artwork on display inside, you can also sit in a small theatre and watch two movies taking a total of an hour, beginning with ‘Craitbul’ the indigenous dreamtime story about this region and followed by ‘Volcano’ which tells the story of the eight major eruptions that created Mount Gambier. This should be your first stop to get an understanding of this ancient volatile area and it answers a lot of those how? Why? What? questions we all have.

Armed with knowledge you’ll want to explore further and there is an even more spectacular and larger sinkhole to see by taking a short drive out of the centre of town to Umpherston Sinkhole. This sinkhole has a well planned sunken garden which was created by the once landholder, James Umpherston, in 1886. Today visitors can view this unique garden anytime between dawn and dusk and walk down into the garden and through the terraces full of tree ferns and hydrangeas. It’s a sure spot to see possums too, even during daylight hours. This serene garden is a wondrous place to sit a while and enjoy the unique surroundings. 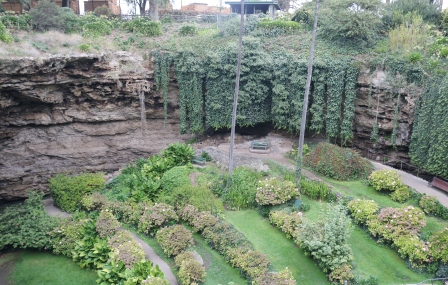 The Blue Lake Holiday Park is a conveniently located caravan park being within walking distance of the Blue Lake but it also sits amidst other scenic attractions including Valley Lake, the road to which runs behind the park. This is another crater lake and popular with locals for recreation with green grassy areas for picnics, playgrounds for children, a wildlife park, walking trails and a boat ramp. You could easily spend a day just here. The wildlife park had plenty of pathways to meander along as you look for birds and animals including a few kangaroos lounging in the grounds. 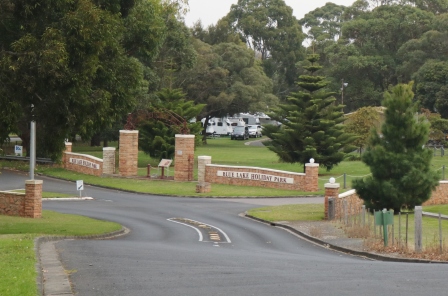 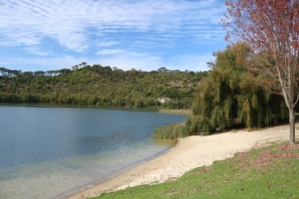 At Valley Lake you can also try your hand at a unique sport. Have you ever tried Frisbee golf? Well you can here at the Disc Golf Park which is pretty much golf using a Frisbee with the purpose of ‘sinking’ your Frisbee in a chain basket using the fewest number of throws. The rules and map of the course are all laid out if you fancy having what I imagine with my accuracy could be a long and frustrating walk. 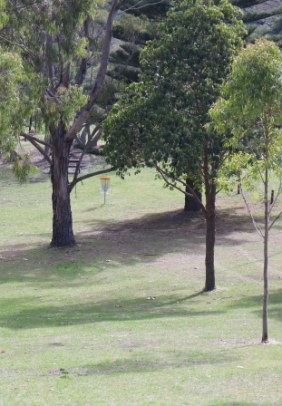 The park is also home to some interesting pod sculptures created from limestone by Stephen Newton. It’s open to the interpretation of the beholder but they are named Anticus Lobus 1 & 2 (Latin for ancient pod) and depending on which way you look at them they resemble a pumpkin or a peanut as the plaque suggests. 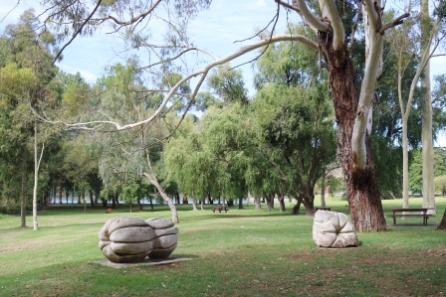 From Valley Lake as well as a number of other locations around town you will keep noticing a large stone tower on top of a hill. This is Centenary Tower standing 190 metres above sea level and from the car park at the base you can walk the steep, steep road to the top.  Believe me the walk is hard going with the gradient seeming to increase with each step but as you would expect the view from the top is awesome.

You can take in panoramic views of Mount Gambier, the lakes and surrounding farmland and see some of the obvious crater sites mentioned in the Volcano movie. The tower was built to commemorate the centenary of Mount Gambier’s sighting by Lieutenant James Grant aboard the HMS Lady Nelson and if you visit when the flag is flying from atop, you will be able to see inside the tower and climb to an even higher viewing point.

Mount Gambier certainly lives up to its title of city of Earth, Fire and Water.

6 thoughts on “Mount Gambier – City of Earth, Fire and Water”

When the Hydrangea is flowering, it’s not long until Christmas. 🌸
Another week…another magazine article. 🙌
👌💚🛟
3 weeks to go🎄
When you visit Burra in South Australia, (see my story in On the Road RV Touring & Accessories Guide), take a short drive out of town to this most photographed ruin in Australia.
Sunset magic 🧡