Are you familiar with the term Peace River? It was a new one to me but Australia’s largest river, the Murray River has been dedicated as one. I was only aware of it when I noticed a dedication plaque that is fixed to the bridge that spans the river from Goolwa to Hindmarsh Island.

To get the story behind it means getting to know a little of the story of Sri Chinmoy, an Indian spiritual leader, author, artist, poet and musician. He was an advocate of meditation on the theme of inner peace and also advocated athleticism. His early years were spent in India where at the age of 12 he joined an Ashram, spending 20 years in spiritual practice. He later moved to the United States in 1964 to guide westerners in spiritual fulfilment. In this time he began giving lectures at universities across the United States and also in Europe, Asia and Australia and then opened a number of Sri Chinmoy centres around the world. He was also a musician and athlete and these attributes were a catalyst behind the holding of Peace Concerts and Peace Runs in many countries around the world. The Peace Runs are a symbolic relay style run which sees participants run through countries carrying a flaming torch representing harmony.

In his lifetime (1931-2007) he was a well-respected figure and his positive work was recognised by well-known musicians, religious figures such as Mother Teresa and Royalty including Princess Diana whom he met with in 1997. In 2007 he was nominated for the Nobel Peace Prize and he won many other awards for his work in promoting universal peace.

In 1986 the Sri Chinmoy Peace blossoms program began in which over 1000 places of interest around the world were dedicated as places of peace and harmony. Amongst them are the Taj Mahal, Niagara Falls, Mt Everest and in Australia the Sydney Opera House and the Great Barrier Reef Marine Park. In 1993 the Murray River was dedicated as another one of these places and 5 plaques were to be placed in areas along its length, one of those being under the bridge at Goolwa.

In 2014 an official ceremony took place in which members of the Sri Chinmoy community, the local Mayor and school students came together to participate in a torch carrying peace run followed by a ceremony to dedicate this Peace River.

The wording on the plaque reads:

After a journey of 2,520 kilometres, spanning three states of Australia,

in the vicinity of Goolwa, South Australia.

This epic river has now been dedicated as a Sri Chinmoy Peace River,

joining many other symbolic landmarks around the world,

that have been dedicated as Sri Chinmoy Peace Blossoms.

Each one powerfully reminds us of nature’s peace and tranquility.

In this spirit, may the gentle waters of the Murray River

carry our common aspirations for peace throughout the length of this ancient land. 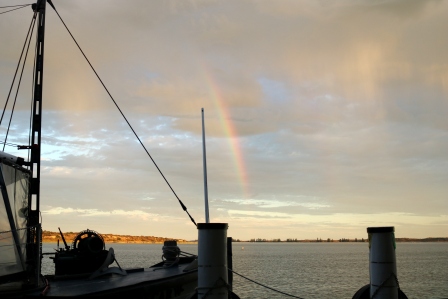 For anyone who’s ever spent time boating on the river, spent days camping beside it or just sat and watched the river traffic and birdlife go by, it certainly does deserve its title as Peace River and something we should all cherish and nurture.

Wishing you a peaceful day.

Water lily 💛
December is already busy. 😝 #neokelpie #pooped #kelpiegram #awdri #nonworkingdog #australiankelpie #creamkelpie #blondekelpie #sleepydog
Summertime views☀️
Hey 👋 #goolwabarrage #goolwa #newzealandfurseal #furseal #seal #wildlifephotography #murrayriver @murrayriverlakescoorong #wildlifephotography #southaustralia #australia
Goolwa sunset perfection 🧡💛💜
We took a drive to the Murray Mouth today, where the river empties into the Southern Ocean. Normally you can drive along Goolwa Beach and around to the Murray River side, but not any more. 😱 A dune has turned into a cliff and it’s impassible by car. The sand spit on the Coorong side of the mouth seems to have stretched closer to the Goolwa side than ever before. Lots of things have washed up onto the beach too, including dead carp and even…a kangaroo! 🙁 #murraymouth #murrayriver #goolwabeach @murrayriverlakescoorong #goolwadunes #beachdrive #southaustralia #murrayriverflood2022