This weekend is your last chance if you’re in Adelaide to experience the Umbrella Music Festival. This year the festival has run from July 12 to this Sunday July 28 and it’s a chance to get out and enjoy live music in the city and suburbs with everything from pop, rock, hip hop, jazz, folk, metal and everything in between.

The festival that was established in 2016 keeps growing each year as venues and artists, promoters and councils register to get on this live music wave that hits at just the right time of year when people are looking for something to do and venues are looking to entice customers in.

Did you know that Adelaide is officially recognised as a UNESCO City of Music? In fact we’re the first and only City of Music in Australia but before the protests begin I should mention that other UNESCO creative cities include, Melbourne – City of Literature, Sydney – City of Film, and Geelong – City of Design.

South Australia is a state filled with talented local musicians but it also hosts a number of world class music and arts festivals including WOMADelaide, Adelaide Cabaret Festival and the Guitar Festival. It’s the state that’s also home to some of Australia’s greatest bands including Cold Chisel, The Angels and Hilltop Hoods. Singers the likes of Paul Kelly, Bon Scott (AC/DC), Guy Sebastian and Sia all hail from Adelaide.

So live music certainly has deep roots in Adelaide and you can be assured of some class acts during the Umbrella Music Festival too. There are still plenty of choices to see during this last weekend and you can search by genre, location and more to find something to suit your taste in music.

I was fortunate to catch ‘Rumours – the Fleetwood Mac show’ last weekend and a very tight performance it was. The show focused on songs from Rumours, Fleetwood Mac, Tusk, Mirage albums, and more and covered all the favourites like ‘Rhiannon’, ‘Dreams’, ‘Little Lies’, ‘Songbird’ and more with the finale of ‘Tusk’ nearly bringing down the house with an incredible drum solo. 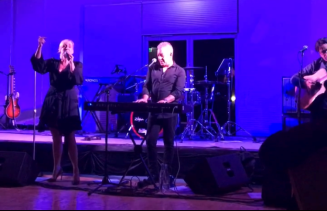 The sound production was perfect for the band which consisted of well-known Adelaide professionals; guitarists (Rob Pippan, Shaun Duncan and Gary Isaacs), drummer Matt McNamee, and keyboard players (Rob Vorel and Ian ‘Polly’ Polites). The harmonies of Polly and Nanette Van Ruiten, sharing lead vocals, were sublime and added to a top night of entertainment and as close to seeing the real thing as you could hope for.

Don’t miss the chance to experience a great night out this weekend, and for a beautiful rendition of ‘Songbird’ visit my Instagram page to see the video. For those not in Adelaide perhaps it’s one event to keep an eye on next year.