The spring school holiday time is just about to start in South Australia and soon families will be loading up cars and caravans and heading off for a couple of weeks of respite from the rat race. The weather is still a bit unpredictable at the moment, 30 degrees one day and 16 with rain the next so many will still be looking to head north to better their chances of good weather. Yorke Peninsula is always a good choice and further north the Flinders Ranges will also be popular at this time of year too.

If you are travelling north out of Adelaide along Port Wakefield Road keep your eyes peeled for the interesting, larger than life scrap metal sculptures that line the roadside for a short distance between Lower Light and the town of Dublin. For those that live in South Australia they have been seen since the late 1990s and were originally erected as a protest to the government of the time, against the establishment of a dump in the upper St Vincent Gulf and fears for the environmental impact it could have.

The statues which include an environmental lookout tower (with 2 people manning it), a rat, blowfly, UFO, Ned Kelly, a cockroach and tin man all of which held political posters opposing the dump. They were all made by a local resident, Stephen Jones and with their prominent position on such a major highway, have become well known pieces of social history. They appeared one by one over time with the rat and the cockroach representing the politicians of the time. The Premier of the time, John Olson was represented as Ned Kelly. 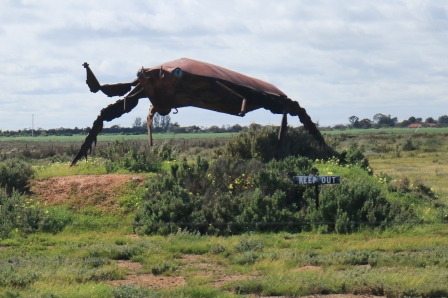 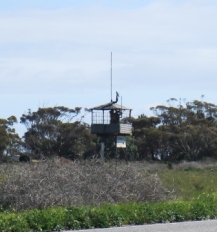 The original protest unfortunately did not stop the Government from going ahead with the dump but the characters have lived on and continue to hold the Government to account on other political issues. The  UFO once read ‘Lost in Waste’ in reference to the dump but now has a go at (the ex Premier Jay Weatherill), ‘All aboard to Planet Jay’. 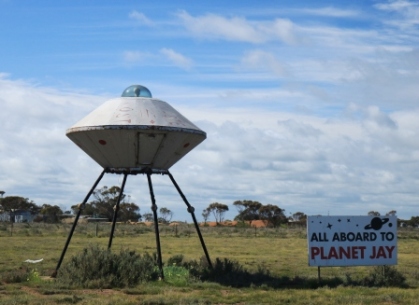 In recent years they have been used to protest against other state politicians and Premiers and hone in on issues affecting the state. They are always something I look forward to seeing appear out of the flat surrounding plains and hopefully they continue their purpose of voicing public opinion and keeping the Government on notice when it comes to protecting the environment and other state issues. 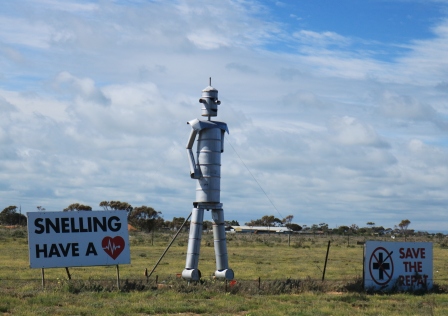 Once you’ve passed these roadside sculptures you know you’re on your way to the holiday destination!