A recent holiday to the copper triangle region of Yorke Peninsula in South Australia led me to discover some more street art, a pastime I love when travelling. In the towns of Moonta, Kadina and Wallaroo you can find some bright and beautiful murals, large scale and small, some that have been around for a while and others relatively new.

Starting at Moonta and strolling through town you can find some gorgeous works by Nicky Create, a South Australian artist, muralist and street artist. Her specialties are nature themed and botanical murals and you can find her work adorning the walls of Nook & Nourish, a vegetarian and vegan restaurant on the corner of George and Ellen Streets. While in Moonta you can also find another cute advertising piece by Julie Cheshire and lots of other quirky and pretty signage all along the main shopping street.

Kadina has another spectacular mural wall create by Nicky Create, on the Kadina jewellers shop. This beautiful piece was completed in 2019 and is an interactive piece in that the public is encouraged to pose in front of the peacock tail and sit on the swing seat suspended from the wall in front of this amazing artwork. Kadina also has a painted water tower in Frances Street which features a young maypole girl holding copper and wheat which signifies the Cornish history of the area. On the other side of the tower is a steam engine representing the rail line that once ran alongside the tower. This mural was completed in 2018 by Melbourne artist Resio. 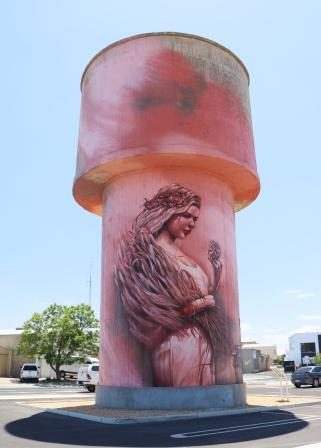 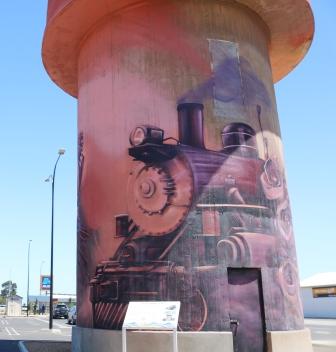 There are some historic looking murals to find in Wallaroo depicting scenes of this port town when it was once one of the busiest ports in the state.  Ships brought cargoes of timber, coal, machinery and food supplies and left laden with copper ore and ingots and later wool and wheat.

In my travels I also found a new memorial in the locality of Port Hughes. This Seamen’s Memorial was created in 2020 and sits on the foreshore where you can glimpse the sea through it. Two stone pillars frame a metal cut out sailing ship and a plaque states that the memorial is:

Dedicated to the memory of those who went to sea from Port Hughes, Simms Cove and Moonta Bay and did not return, and those who live locally and died at sea elsewhere. 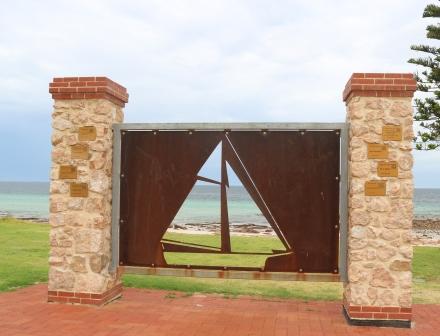 Plaques containing the names of those lost at sea are on the stone wall and each plaque has a QR code which you can scan and link to information of each of person’s story of incidents dating from 1866 to 2009.

10 thoughts on “Street Art of the Copper Triangle South Australia”