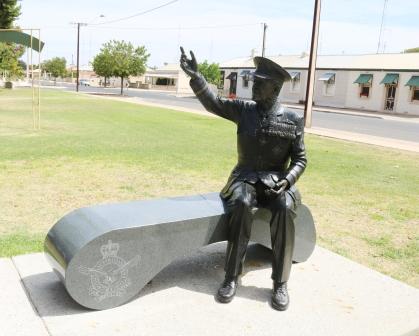 A new sculpture has been placed in Moonta’s Queen Square which pays tribute to Sir Richard Williams, a man born and raised in Moonta and the man regarded as the father of the Royal Australian Air Force.

He was instrumental in the formation of the RAAF in 1921 and in its development between the wars, as the first Chief of Air Staff.

The statue was commissioned to coincide with the centenary of the RAAF in 2021 and a ceremony was held on the 7th of November last year, where the statue was unveiled by the Governor of South Australia Frances Adamson and the plaque unveiled by President Air Force Association (South Australia) Dr Robert Black.

As well as the unveiling there was a street parade which included members of the RAAF Base at Edinburgh and Army and Air Force Cadets, a RAAF PC-21 fly past, a vintage aircraft fly past and a thanksgiving service at the Moonta Mines Uniting Church.

The bronze statue was created by sculptor Tim Thomson and is full of symbolism starting with the seat beside the statue which invites people to sit down beside the man as if to have a conversation. The statue depicts him as an older man, wearing his Air Marshal uniform with his awards and decorations pinned to his chest.

In his left hand he is holding the RAAF Roundel which symbolizes his cradling in his hand, the Air Force he created. His right hand points to the sky where he flew as a military pilot serving with distinction in WW1 and conceived the vision and need for an independent Air Force for Australia.

Beside the bench a plaque set in stone reads as follows:

Father of the RAAF

of Richard Williams and Emily nee Hodge. His parents were Cornish. His father

emigrated from Cornwall on the City of Adelaide.

working for the Moonta Post office, a greengrocer and the Union Bank. He then

a Lieutenant in the permanent forces.

Squadron (Australian Flying Corps) in World War 1, he was awarded the Distinguished

force and rescuing a pilot behind enemy lines. He then commanded No 1 Squadron

in 1917 before assuming command of the Royal Air Force’s 40th Wing. By the end of the

war, he was the AFC’s foremost operational commander.

Showing immense political acumen, he was instrumental in the formation of the

Royal Australian Air Force in 1921 and its development between the wars.  He also

Completed a pioneering flight to the South Pacific in 1926.  Appointed the first Chief

of Air Staff of the Royal Australian Air Force, he served in the position three different

times for thirteen years rising to the rank of Air Marshal. Serving in World War 2 in

various staff positions across the globe, he retired in 1946.

After leaving the RAAF, he led the Department of Civil Aviation and was knighted in 1954

Air Force funeral with a flypast by seventeen aircraft.  To this day he is regarded as

the ‘Father of the RAAF’ and the most significant figure in the history of the RAAF.

An important piece of South Australian and Australian history to look for in Moonta. The drive to Moonta takes a little over two hours to the north west of Adelaide on Yorke Peninsula.

3 thoughts on “Moonta – Birthplace of the Father of the RAAF”