Adelaide city is mental at this time of year, it’s called Mad March for a reason! The Fringe is on for starters which if you’ve never been, is Australia’s biggest ticket selling open access arts festival.

The city is abuzz every night, it is nuts! Live music everywhere, all types of performers, comedians, magic etc… Parks, gardens, clubs and all sorts of venues have something going on.

We took a trip into the city to take a step back in time and see the legendary Ross Wilson performing everything from the Daddy Cool days to Mondo Rock and more, and what a legend he is. I have to confess we’ve been stalking him for years and every opportunity we get to see him live we try to make it. He never disappoints, such a showman and what a voice. We had a great evening sharing it with strangers but all of us were there for a good night and a party, and dance up a storm we did. 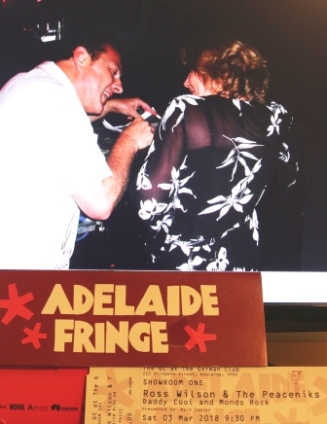 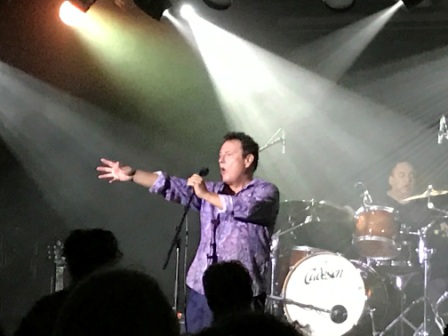 On our walk back to our accommodation we happened to go past the church that we were married in 31 years earlier so couldn’t resist standing on the steps again and take a selfie, looking only slightly different to what we used to.

Being right in the heart of the city we thought we’d treat ourselves and stay within walking distance of the venue (well 1.5 kilometres away) and stay at a motel. That was my first mistake!  If you’ve ever stayed in Adelaide in mad March you’d know to expect all accommodation to at least double if not triple their usual prices.  Naturally I went for the cheapest option and paid for it in other ways as we found ourselves in ‘Bates Motel’. (The name has been changed to protect the innocent!)  It just reinforced on so many levels why we love caravanning.  Price, views, comfort, cleanliness – all of which were lacking at this establishment.  Rumour has it, it will be knocked down soon, wow no kidding, about 40 years too late I think.  Seriously when was the last time you saw a bathroom like this, charming in a shack but just dismal in a city motel. But despite this it served its purpose and we had a great night out.

One of my must do’s when we were in the city was to check out ‘Street Art Explosion 2018’ which was incredible. You can pay to go on a walking tour which would no doubt be interesting or you can do as we did and download a map showing where to find all the art in the city and go it alone. With a lot to see and not a whole lot of time we chose to drive and walk to as many sites as we could which turned out to be great exercise anyway as I was navigating then jumping in and out of the car armed with my camera like it was some kind of mad spotto game. So many brilliant and quirky pieces of art around town, I’m in awe of the artists. The map gives you not only the names of the streets and laneways where you’ll find the art but also the artist’s names if known. Mind you I did see some little laneways and back alleys of Adelaide that I didn’t know existed and won’t need to see again. 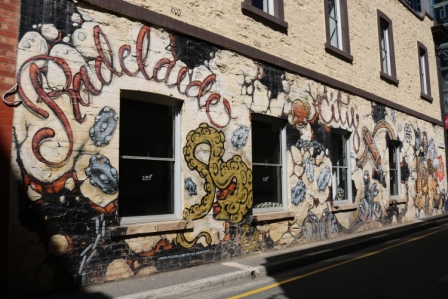 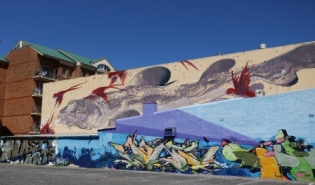 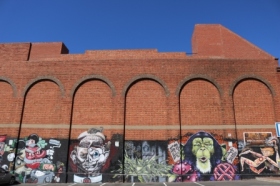 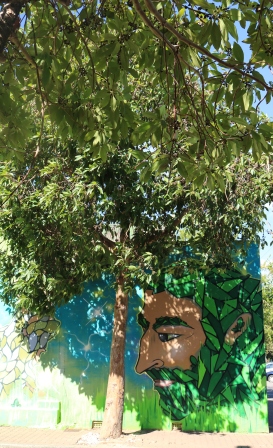 Unfortunately I couldn’t get to all of the art works because another little thing called the Adelaide 500 was on, which closes off, or restricts traffic, to a lot of the east end of Adelaide. This is a motor race of supercars and others that uses a street circuit for a few days and over the weekend every year. It’s a fantastic spectacle and as well as all sorts of motor sport during the days of the event there are also fly by’s from RAAF F/A-18s Hornets.  Which when you are not expecting them scare the sh***t out of you as they fly low and loud and then hover menacingly overhead. Race days are followed up with a concert every night too which this year included Jimmy Barnes one night, Birds of Tokyo on another and the finale of Robbie Williams on the Sunday night. 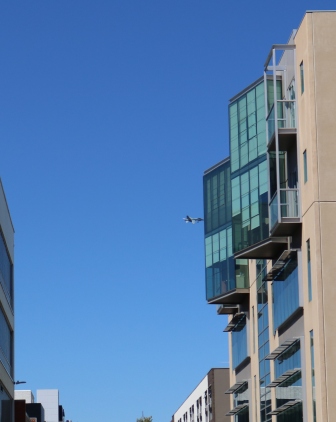 So having done as much as we could of our own race around Adelaide to see the street art we had one final pit stop at the Prohibition Liquor Co. for a tasty drop of handmade small batch craft gin! Very tasty indeed. 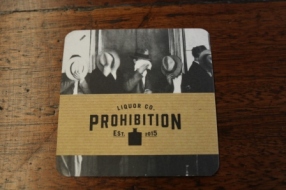 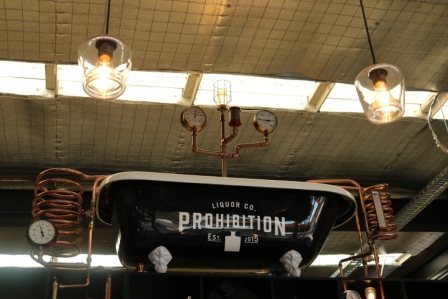 The morning after came around and it was time to drag our sore heads out of the big smoke and leave all the rev heads, party people, concert goers, and happy people behind and head for the hills without giving a backward glance to ‘Bates Motel’. Take me back to my caravan!

6 thoughts on “Weekend in ‘Radelaide’ – Such a Cool Cool World.”