It goes without saying that my holiday of choice is hitching up the caravan and taking to the open road, but occasionally it’s good to be a tourist in your own city and take some time to see it through different eyes.

One thing I do love looking at as you stroll through the city is some of the gorgeous architecture from a time when detail on building facades was very intricate and ornate. In the heart of Adelaide you can find many examples that are thankfully still standing today, including in Rundle Mall where you can wander and see some old treasures squeezed in between newer buildings.

I particularly like that businesses names were incorporated into the buildings at the time they were built and live on today even if the businesses have moved on. For instance the Balfours name is synonymous with Adelaide and is still the favourite bakery for a lot of South Australians. They are the makers of the famous frog cake after all! This building in Rundle Mall was built in 1924 and back in its time was ‘the’ place to have lunch when in Adelaide.  One description of the Balfours café that made me chuckle was an historian’s account which read:

(The Balfours Café) “breathed a gracious but relaxed atmosphere which suited the nature of Adelaide society at that time”. 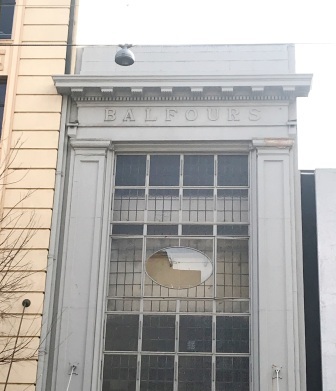 Another stand out building because of its remarkably different look that wouldn’t look out of place in a Harry Potter movie, is the C J Young’s Shoe Co. building. Built in 1925-1926 it has a Georgian style façade which is striking because of the large bow window and dark brown glazed bricks. It has a very distinctive look and is not like anything else I’ve seen in Adelaide. I love the fact that a shoe shop still tenants the ground floor of the building today. Adjoining this building is Pharmacy Building which was also built in 1925 for the Birks Chemist chain.

Adelaide Arcade in the mall is an extremely ornate building which was opened in 1885. The style of the building is Italianate revival and was considered very modern at the time, especially because it was the first retail establishment in Australia to have electric lights. The tiled flooring, original upper arcade shopfronts and ceiling of skylights make it a beautiful building to visit. Rumour has it that it’s an extremely haunted building too with at least six ghosts frequenting the arcade. One is said to be the one time caretaker who sadly died in 1887 when he fell into the generator that powered the lights. 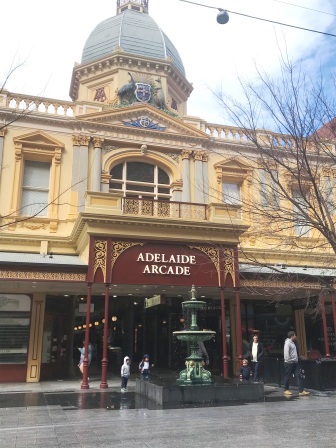 In front of the arcade is an ornate fountain which over the years has had a few different homes in Adelaide, each time being moved to suit progress and rebuilding of areas in the city. The extremely ornate fountain was made in London from cast iron in the late 1800s and is painted in Victorian era colours.

Another impressive building along the Mall is one where the upper two storeys are described as being built in a style of the German treatment of Renaissance. I can’t vouch for architectural style but it certainly draws attention to itself and stands out from surrounding buildings.

No visit to Rundle Mall would be complete without mentioning the arty sculptures that it’s well known for including ‘The Malls Balls’ as they are affectionately known to South Australians. This shiny reflective 4 metre high public art piece which is officially called ‘The Spheres’ is a very popular landmark and a must have photo to snap when in Adelaide. They are the work of Bert Flugelman, measure more than 2 metres in diameter and have stood in the mall since 1977. 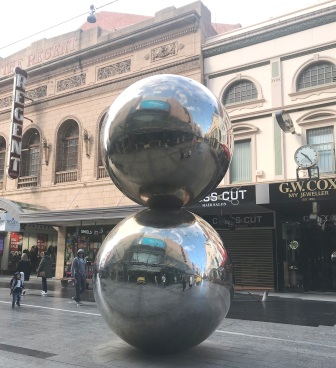 The next most favourite of the city sculptures would have to be the pigs in the mall…yes pigs. I don’t think there would be a child (and some adults for that matter) in Adelaide who hasn’t had a photo taken sitting on or interacting with one of the pigs. They just bring a smile to your face as you pass by this life size quartet which is officially called ‘A Day Out’ by the artist Marguerite Derricourt. The four pigs are all named, Truffles is the standing pig, Horatio the sitting pig, Oliver is snooping in the bin and Augusta is trotting along.  They have been bringing smiles to passers-by since 1999. 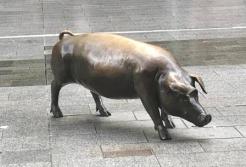 Last but not least is a really joyful sculpture to find in the Mall, called The ‘Girl on a Slide’ by John Dowie. It isn’t a highly visible piece and it was created deliberately that way to be a smaller piece of art that would be ‘discovered by accident’.

These are just a sample of the interesting sights to see in Adelaide’s Rundle Mall if you are having a city outing but as for the change of accommodation style for me? Well I would have to say the views from a caravan are pretty hard to beat in comparison although I could see our car in the multi storey carpark from our accommodation.

If you are looking to visit the city as part of a caravan trip, there are a number of caravan parks only a short drive from the city of Adelaide and driving in the city is a breeze compared to the busier eastern state cities. With Adelaide laid out in a grid style between North, South, East and West Terraces it’s also an extremely easy and flat city to walk around without losing your bearings.