The nature of street art or urban art is that it always seems to be added to or changed altogether so with every visit into the city centre I try to visit streets and laneways I haven’t looked at before to find something new. On a recent visit to Adelaide I managed to find a few that were new to me but not necessarily new to the city.

I’m finding now that having been a fan of street art for a few years I’m beginning to recognise the style of some of the incredible artists who paint or spray these grand scale paintings. Here are a few of the my latest finds and where you can see them.

Topham Mall off Currie Street has a couple of murals adorning car park walls these were painted by artists: Fredrocker and Beastman. 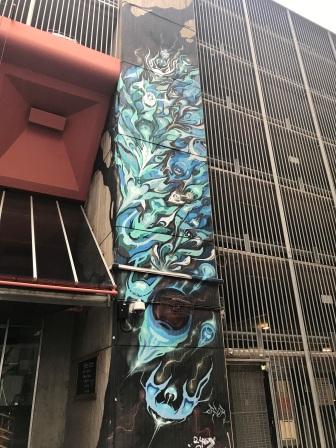 More art by Fredrocker and Mike Makatron can be found in a laneway off Currie Street next to the Zhivago Nightclub. That’s where you can also find this little weirdo lurking down at street level. 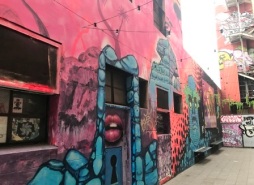 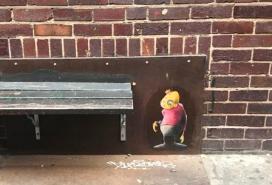 In a few places across Adelaide you can find paste-ups by Peter Drew. Known as an activist he highlights issues to foster debate on issues including this one, what is an Aussie? When you look at the history of migrants in this country and the undeniable impact they had on exploration and opening up of the country, such as Afghan cameleers and Chinese gold miners it makes for very interesting discussion.

In Woods Lane which runs off Bank Street is the ‘Face of a girl’ by the artist Rone (Tyrone Wright). He is particularly good at his portraits of women in which he juxtaposes their beauty against the decay of old buildings and sets them in places where women would probably not feel safe. Another interesting twist on art and reality.

An artist with a few pieces around town is 10TKL (Tentacle) which as his name suggests always include cephalopods (octopus or squid). This one in Gilbert place is called ‘early squid gets the worm’. In Twin Street off Rundle Mall you can find another of his huge murals. 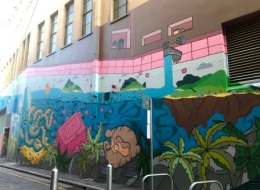 Rundle Place off the Rundle Mall is another spot to find some quirky pieces, I’m not sure of the artists but there is lot to see in this laneway that also houses city library. Funny how things turn out sometimes too, while taking a photo of paper plane art on the exterior of the city library building I didn’t notice that a plane was actually flying overhead and lit up by the sun in between clouds. Something I only realised after looking at the photo much later. 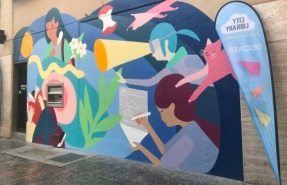 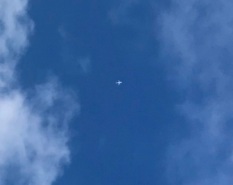 In Gresham Street off Hindley Street you can find work by Konny Steding and a big beautiful mural on the side of a building by Vans the Omega (Joel Van Moore). This South Australian artist has a large number of artworks to be found in the streets of Adelaide but to me his large scale murals of women’s faces in particular makes him a standout and one who I can usually recognise his work now. Another of his colourful portraits is on a wall at Lady Burra Brewhouse in Topham Mall, off Currie Street.

It definitely pays to keep your eyes open and take a few detours when walking around the city. Learning about the artists and their motivation behind these works of art adds another dimension.

So many beautiful eucalyptus blossoms on show at the moment, don’t forget to look up and enjoy.😊 💕 Pink tutus for gum nut babies.
Spotto a deer 🦌
The winner of the prettiest breakfast or brunch goes to...🌸☕️... well you’ll have to read my latest blog post via the link in my profile ~ caravancorrespondent.com
Autumn changes happening in the Adelaide Hills 💛🍁
Adelaide Hills sunrise 🧡
#travelquotes