This was one of the must do things on our list when coming to WA and that was of course to go to THE most westerly point on the mainland, Steep Point.

We didn’t know much about it other than where it was before heading over here and then the more we found out about it and how to get there the more daunting it sounded.  We had conflicting information anything from ‘yeah you can do it in a couple of hours’ to ‘you will need all day’.

We got the most reliable information we could and with no illusions about how tough it could be, we packed in food and heaps of water, fuelled the car (2 tanks) and set off at 5.30am.  It was going to be another hot day, 36ish with high humidity and no doubt loads of flies again as the day warmed up. We stayed at the closest accommodation spot we could manage with our van, around 15kms from the turn off to Steep Point. The drive to Steep Point would be 146km and you are told to allow 3 hours to get there. This should already be painting a picture in your head of what terrain lay ahead.

The road to start with is bitumen for around 15kms then it changes to dirt, but it’s good dirt. There was a glow on the horizon when we started and by 6am it was getting light as the sun came up, lovely pink clouds and a few darker ones with lightning in them.

There are a couple of stations out here and we saw goats crossing the road, but they got out of the way before we got to them.  A bit further on we saw a little roo sitting on the road too, he wasn’t in much of a hurry to move.  Around half an hour into the trip we passed the gates to one of the stations and from there the road got even rougher with bigger corrugations.

Then surprise, surprise there was another stretch of bitumen but it only lasts a few kilometres before turning back to a dirt road. Almost two hours into the trip and we arrived at the registration station and the area to let your tyres down – the road is going to get more challenging.

Soon enough we get to a signpost pointing the way to Steep Point and only 40kms to go. So far the journey had taken us 2 hours so we thought we were doing well! We were down to a one track road so now we had the added challenge of having to pull off every so often when a car was coming from the other direction.  It was the end of a long weekend in WA and quite a few people had been camping out here, so traffic coming out was all we saw, we were the only ones heading in.

Then things started getting really rough, there was around 18kms of rocky, rutted, potholed track that at times we had to go as slow as 25kmh over the corrugations. Next comes the sand hills which have you tossed from one side of the car to other as you bounce your way through them.  Around us were huge untouched sand dunes. The scenery around you is changing all the time and so picturesque that all the jostling about is bearable. 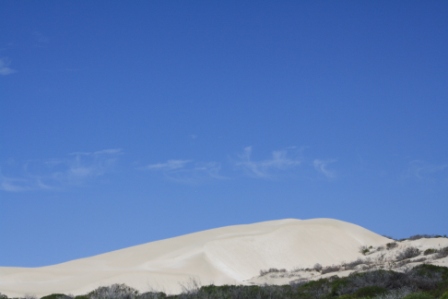 Next comes one huge sand hill that is a steep downhill drive and only one way, so that when you come back this way you have to take a short detour around this dune and then join up with the track again. One thing that would have been a good idea to have before venturing out here was a beach driving flag on the Landcruiser so that people can see you coming.  There are a lot of small sand hills and corners and scrub that is car height so any pre-warning you get of someone coming in the other direction is a good idea when you are sharing one track. 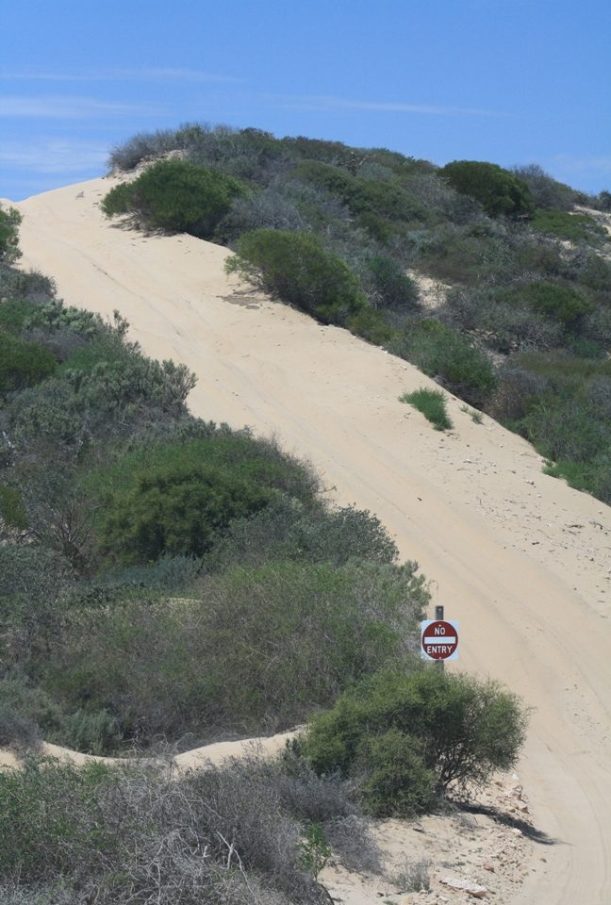 We bounced our way on for about another hour and got to the next signpost saying that we had 22kms to go to Steep Point.  Soon we spotted water ahead of us and the land mass that is Dirk Hartog Island. We also spotted the barge crossing from the island which is the only way you can get there by car. The drive gets really spectacular now when you have to drive onto a beach then off again to continue on your way. 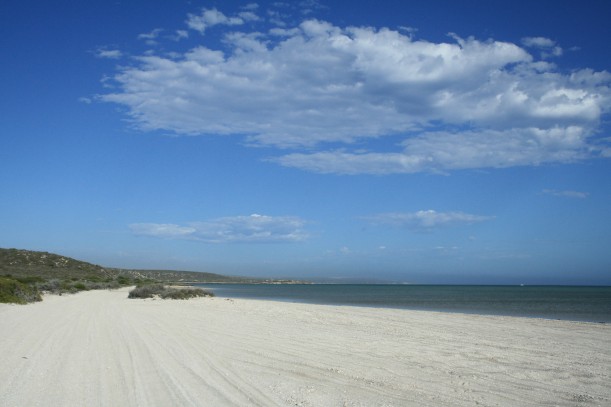 Finally we made it to the Rangers Station where we dropped in to check in and find out any other information we may need.  We were told not to take the track which heads down past the cliffs on the western side of the point because the roads are too ‘crappy’ at the moment.  Apparently we’ve been on the good road! Ok, point taken we were going to be happy making it to the end.

The Rangers Station is only 8km short of Steep Point but first is Shelter Bay and this is the spot where all the campers were.  What a sight! We were blown away once again with the colour of the sand, the water, signposted campsites (which you have to book) and big fish swimming so close to shore you could see schools of them going by. But first we have to get to the destination, which finally is just 2kms away! 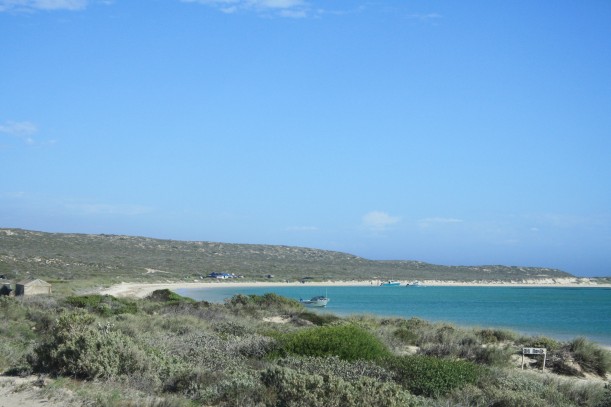 We made it…9.20am at Steep Point.  Almost 4 hours to drive around 160kms in total, including stopping to take photos, take in the scenery and have a chat with the ranger. The most westerly point of mainland Australia.  An epic journey and not one to be taken without a bit of research. 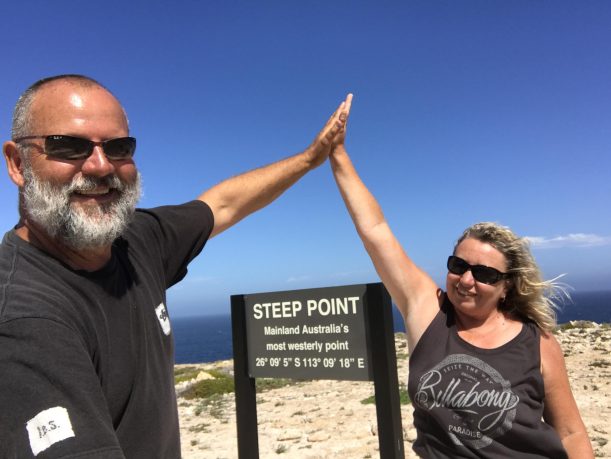 For the next hour we admired the wild Indian Ocean, wind whipped waves crashing against the cliffs to the west, took loads of photos, watched fisherman on the cliffs to the right using balloon floats (a whole other story there) and just taking in the magnitude of this incredible drive. What a relief.

Feeling pretty happy with ourselves we started the drive back, this time taking in more of the scenery and feeling a bit more confident knowing what lie ahead.  We stopped in to look at some of the campsites at Shelter Bay and it’s no wonder they are popular with campers, they looked well set up with tents, swags, shade and boats.  They are well laid out with plenty of room between sites, excellent drop toilets and that view.  The beach is so clean and covered in shells, coral and starfish. 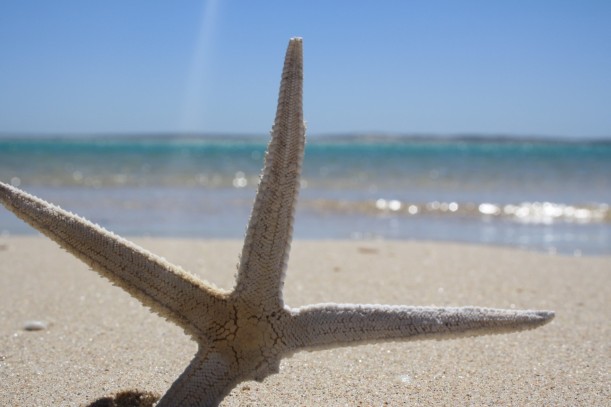 Lots of evidence also of big fish caught here.  Harry thought he’d try his luck fishing with a lure or two, the fish were in so close, but unfortunately they probably can feed on anything they like so weren’t interested.  A great place to spend an hour or so anyway.

And you have to give it a go, especially fishing from the ‘road’ you are driving on.

We headed home back the way we came, up and over dunes, more corrugated dirt and stone tracks, dodging mad drivers coming in the other direction now.  We re-inflated the tyres, a slow process with our small compressor (may have to upgrade that) and drove through the afternoon with stormy looking clouds building up and the humidity and flies increasing. But still stopping often to take photos and drink in the views.

By the time we made it back to our caravan the ominous clouds were surrounding us, rumbling with thunder and trying to rain but not sending down more than a few big drops which evaporated quickly.

What an incredible day!