The laneways of Melbourne are well known for the street art, a couple of the best are ACDC Lane and Hosier Lane. As the name suggests, ACDC Lane has a lot of art that pays homage to the great Aussie rock band of the same name and in particular to Bon Scott and Malcom Young. Credit goes to artists Lushsux & Mike Makatron, Steen Jones and Putos  (amongst others) for their work in these laneways. 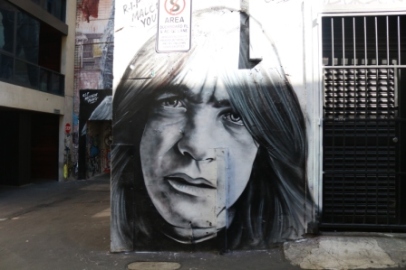 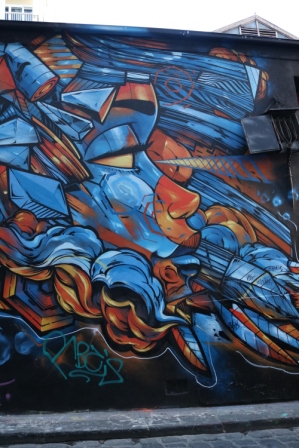 But you don’t have to venture all the way into the crowded city laneways in Melbourne to get a dose of incredible street art. Any trip in the car or tram will result in seeing street art everywhere, from whole wall, huge scale pieces to the odd quirky statement. Pretty much anything standing still seems to be fair game for a splash of colour. 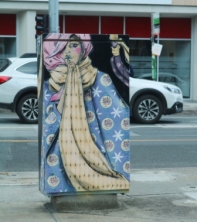 I’m a huge fan of this urban art that is so accessible to everyone and there is so much talent out there. I think it’s especially welcome on otherwise grey concrete walls of car parks and abandoned buildings and alley ways.

I’d like to be able to credit all the artists in these photos but unfortunately some of it was just snapped very quickly in passing.

Some that I am familiar with their work, or can identify are:

Based in Melbourne and responsible for a lot of stunning pieces in Australia and around the world. His work can be found in lots of places around Melbourne (including ACDC Lane) and also on an obscure side of the train track (Pimpinio loop rail siding) on the road between Adelaide and Melbourne. 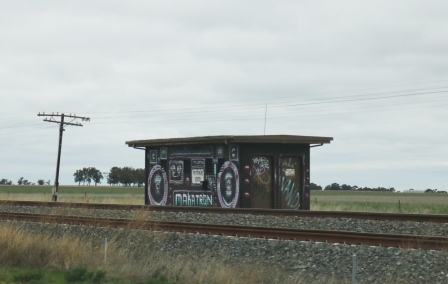 A UK artist who has done a lot of work in the UK, Hong Kong and Australia. This colourful Slurpee advertising was created in conjunction with Leo Burnett (advertising / creative solutions company) for the Slurpee rebranding in 2016.

Originally from Perth, he is now based in Melbourne, his subject matter is native animals and birds, specifically endangered species. Notice the reflection in the eyes of the environment it would rather be in. How good is this sugar glider in Fitzroy.

A Columbian born and Melbourne based artist. This bright piece of work can be found at Cremorne on the Nylex clock silos. It celebrates the cultural diversity in the area with four children happily floating in the blue sky, one is wearing a Tigers guernsey as a nod to the Richmond footy team district that it sits in. The history of the site is symbolized with the hour glasses filled with barley seeds representing both the landmark Nylex clock on top of the silos and what the silos used to hold.

Other art found include those by:

I bet you’ll find some street art just about everywhere in Australia if you go looking for it and it wont take long before you start recognizing familiar styles of these artists. 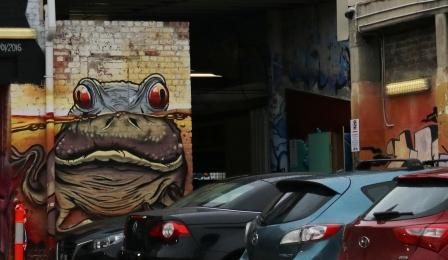 In December 2019 Middleton Beach in South Australia became part of the Encounter Coast Surfing Reserve, approved by the National Surfing Reserve (NSR) body. The reserve is on the Fleurieu Peninsula and is the largest surfing reserve in Australia. The Encounter Coast Surfing Reserve stretches from Parsons Beach in the west to Goolwa Beach in the east, with 22 identified waves. 🌊 At Middleton you’ll also find this terrific, bright mural with the poignant proverb... 🌿 ‘Only when the last tree has died and the last river been poisoned and the last fish been caught will we realise we cannot eat money’. ~Cree Proverb 💙
Enjoy this beautiful land and the people who make it a country we’re proud to live in. Happy Australia Day. 🇦🇺✌️🐨#australiaday @australia @southaustralia
Another event on in @southaustralia this weekend is the @tourdownunder highlighting top South Australian regions to the world. 🙌 Here they go whizzing through #goolwa on the beautiful #fleurieupeninsula the leaders, the others 🤷🏼‍♀️ and entourage. #shimano #tourdownunder2020 @eventssouthaustralia
Head for the hills! 🍇 It’s #crushfestival2020 weekend and wineries are ready and waiting for you to visit. You never know who else might be coming out for a look too. 🐨 #visitadelaidehills @adelaidehillswine #supportbushfirerecovery #wildkoala @southaustralia #bookthemout
The Australia Day long weekend is upon us and like many others I will be enjoying #triplejhottest1002019 and also supporting bushfire affected areas by buying some #adelaidehillswine and #adelaidehillsproduce how about you? 🍷🇦🇺 Looking at the songs I’ve chosen I may have found my new bio too. 😂 #buythemout #holidayherethisyear
💥🧡💛🖤